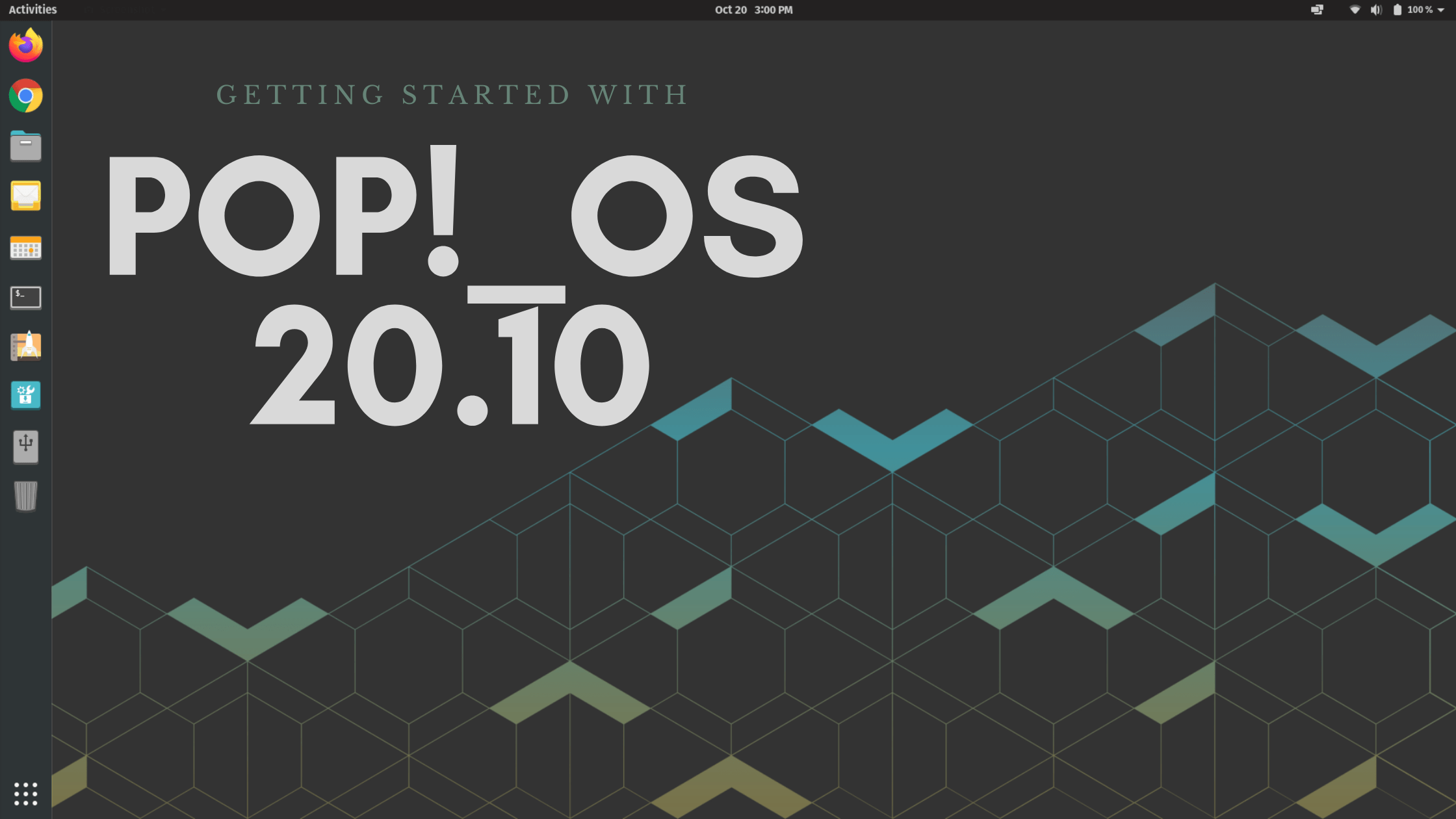 This Getting Started Guide will help set up a new Pop!_OS 20.10 install. I have included common software selections along with a few of my favorites.

If you’re here you probably already agree that Pop!_OS is amazing but if you want a little confirmation (and bragging rights), read the Top Reasons to Choose Pop!_OS.

Get Up to Date

Anytime a new distro is installed, the first step should always be to update the software. Software updates can yield new features but more importantly, updates can have critical bug fixes and security patches. Open a Terminal by pressing Super + T and the following command.

This is a good time for a reboot.

I’m fortunate to have a fingerprint sensor on my Thinkpad T540p but not all distros support it equally. OpenSUSE lacked any support at all. Fedora is a champ and I swipe my finger all day for everything. Ubuntu and Pop!_OS only support fingerprint authentication at login. Bummer. Gnome has at least included support for multiple fingerprints, finally.

Ubuntu and Pop!_OS can support fingerprint authentication across the system with a quick command.

The biggest single advantage to choosing Pop!_OS over other distros is the graphics support out of box.

System76 releases a Pop!_OS ISO with the Nvidia graphics drivers included. Pop!_OS installs and configures Nvidia graphics for you. My Thinkpad has a hybrid Intel Nvidia setup. Pop!_OS recognizes that but defaults to Nvidia. Any of the graphics can be chosen but all require a reboot to take effect.

I can opt for Hybrid Graphics where Intel will handle most of the work and Nvidia will only kick in for heavier applications. I can also choose to use only the Intel (displayed as integrated graphics) to save on power and extend battery life.

Pop!_OS has strong built in power management. In the image above, three options are listed: Battery Life, Balanced, and High Performance. Do not install TLP on Pop!_OS as it will conflict with the built in system.

DVD playback is supported with the libdvd package.

Most of these applications can be found in the Software Center but, frankly, this is just easier. Open a Terminal with Super + T and Ctrl+Shift+V right into the Terminal. I have added -y to automatically confirm installation. Packages can also be stacked. For example, if you wish to install synaptic and vlc, they can combined into

I like going a little old school and installing the Synaptic Package Manager. Its not pretty like a software store but every single package available for your system is listed. Tread lightly and if you’re unsure which packages to install or remove, do not use it.

Gnome Tweak Tool makes it easy to modify the system

VLC is a popular media player.

Steam – gaming platform. I’m not a gamer but for this is the place to download games.

YouTube production program. Before installing the obs-studio package, ffmpeg needs to be installed. If you’re unsure if its present, try installing it anyway.

After installing ffmpeg, add the PPA.

I don’t use Chrome. Or Chromium. Its Firefox all the way. I keep Chrome on my system to check Hacking the Hike for compatibility. There are better, more private, faster browsers available for Linux. I think Firefox works great.

AppImageLauncher is an AppImage management utility. It makes it easier to track which AppImages have been installed on your system, helps to integrate them, and allows the user to easily remove them. It is available for download as an AppImage, DEB, RPM, and Tarball.

Bitwarden is an open source password manager akin to LastPass or 1Pass. It integrates nicely on Android and has autofill ability. It syncs passwords across Android, Linux, ,iOS, OS X, and Windows. Bitwarden can be installed through AppImage, DEB, RPM, and Snap. DEB and RPM packages do not auto update. CLI Tools are available along with browser extensions for most browsers.

Simplenote is a free note taking app developed by Automattic (the WordPress people). Simplenote syncs across virtually everything and supports AppImage, DEB, and RPM. Part of the appeal of Simplenote is markdown support but the other cool thing is WordPress support. Simplenote can be tied to a WordPress account for easy posting.

Zoho Notebook has a sticky note in a notebook feel. Create different notebooks, change the cover image, and fill it with text notes, pictures, and links. While Notebook is not open source, Zoho promises to never read your data, sell your data, or show you ads. They even claim to encrypt it. Not bad a free service. Zoho Notebook is available for Linux as a DEB, Android, and Apple devices.

Use a cloud service to back up your files. There are several that work well with Linux like NextCloud, Mega, and Dropbox. I prefer Mega.

(that’s an affliate link, by the way)

PPA or Personal Package Archive is sort of a mini repo for software that for whatever reason isn’t in the official repositories. The software may still be in a beta testing or is a small project just starting. While PPAs can be a convenient means to installing non repo software, be cautious. Too many PPAs can make software updates unreliable. PPAs could, though very unlikely, contain malicious software. I use the Mozilla Team’s official PPA to install Firefox Beta because Mozilla is a trusted source.

I don’t recommend using many Gnome Extensions. They allow easy customization of the desktop but more than a couple may hurt system performance.

Dash to Dock is my go to for every Gnome system.

By default, Gnome has a small dock on the left. Using Dash to Dock, I disabled Intelligent autohide so the dock would always be up. After disabling autohide, enable panel mode to extend the dock from edge to edge. Dash to Dock also allows changing the theme and the placement to any side.

That said, GSConnect allows notification syncing so that your phone calls, messages, and app notifications will all appear on your desktop. Phone battery life is also displayed. It goes beyond just notifications though.

Text messages can be responded to or even started from the desktop. It also opens up file transfers between devices. While I like Google Messages for RCS and web access, it doesn’t compare to the features GSConnect offers.