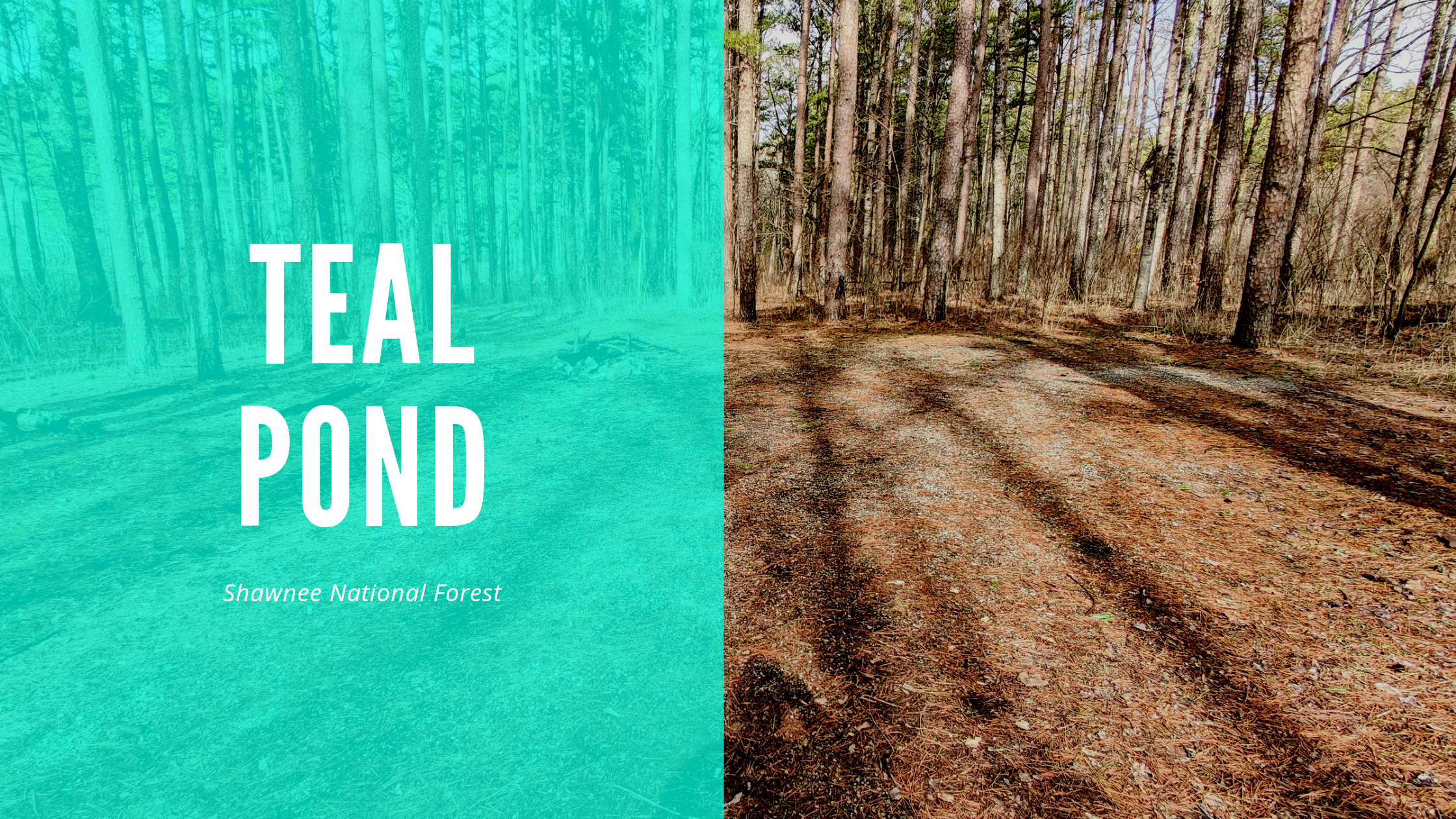 Teal Pond is a forgotten camp site in the Shawnee National Forest While there are two usable spots now, a dozen campsites were once available. The location still proves peaceful and is a reprieve from busier campgrounds.

We recently purchased a Jayco travel trailer and Teal Pond was intended to be our maiden voyage to Garden of the Gods in Shawnee National Forest.  That’s the Garden in Illinois, not the better known one in Colorado. Our intention is to mix boondocking (also called dry camping) in with our current hiking and backpacking.

Unfortunately, our first time out in the new camper didn’t go as planned. I had researched campsites in the Shawnee National Forest area and found Teal Pond to be a perfect first time trip. It’s a quiet spot, infrequently visited, but not so remote that we would be totally out of luck if something went amiss.

Rain was in the forecast. It never seems to rain when I’m working but when I want to camp, it pours. Our three hour drive was soaked. We arrived in the area at almost 9 PM. The GPS coordinates that others laid out took us down a dead end road. That seemed a likely enough place for a campground.

Upon discovering that it was a wrong turn, I attempted to backup our new trailer. The area was unforgiving with hours of soaking rain and recent snow melt. A small mound of snow even still remained.

I had to eat my pride and ask for help. I was trying to back up the trailer on an incline with muddy ground. I was stuck. I made my way to the one nearby home with lights on. I’m not sure if they’d been watching but they were at the door when I arrived. A quick yank by their truck and we were out.

After our unsuccessful off road attempt and the help of a couple good Samaritans, we called it quits for the night. I had envisioned stars and a camp fire for our first trip. Not mud, rain, and being utterly lost.

We saw a Walmart on the way so my wife called to verify we could camp there. Thirty minutes later we were setting up in a parking lot.

This was a different part of boondocking. Not the romanticized kind near hidden mountain streams or in impromptu desert villages. This was the kind of place for eating and sleeping before continuing on.

After a stack of flapjacks and seeing a more cheerful sunny morning, we were reinvigorated. Before hiking at the Garden of the Gods, we were resolved to find the elusive Teal Pond.

And we did. And I felt silly for not finding it sooner.

Teal Pond is largely unmarked. I didn’t find a single road sign yet it was within throwing distance of that fateful dead end. It is easy to miss though. Its a barely recognizable dirt and gravel road.

I parked along the paved road afraid to venture in. I still had a bad memory of being towed out.

The stories were generally true. The campground that once hosted at least a dozen sites had been reduced to two. At least these two were accessible.

There are a couple of fire rings that appear well used. It looked like someone had tried burning some trash as well.

The actual Teal Pond is nearby. A trail connects it to the campsites only a short walk away.

There are no other amenities at Teal Pond so don’t count on potable water or trash service. Bring in whatever you need and please take your trash with you.

Teal Pond looks like the perfect to spend the night if you have a tent or small rig. Even with the gravel, the drive in looks muddy. The campsites would also be a tight fit for our 30 foot travel trailer.