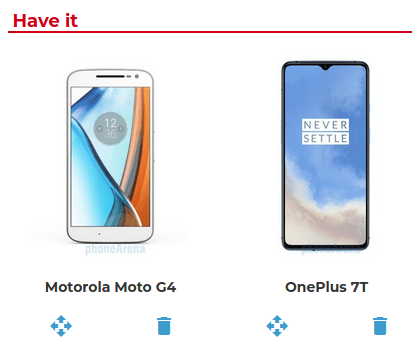 I have a problem. That’s the first step, right? Admitting you have a problem? Well, I do. With smartphones. I don’t buy the latest and greatest. I don’t hop on any Galaxy S93+ Jumbo 5G Alpha bandwagons.

I’m much more of a thrifty shopper. I like buying things used. Take my Thinkpad T540p. It was a glorious eBay find. That’s me with smartphones. What can I buy used this month? What more will I get out of it? Will it take better photos? Will the battery last an extra hour? Can I make money selling my current phone buying a good-ish deal on another phone?

Phonearena has the convenient option to add phones to the user profile. That’s neat. I started adding my old phones. I remember rooting that Droid DNA. Oh, how I loved the voice commands on the Moto X. WebOS was where it was at. I didn’t realize how deep my problem runs.

I’m still not sure if I added all of my many phones.

Why am I writing about this? For starters, its a little embarrassing. I’ve been chasing deals for years. Did that new phone ever really change my life? No.

Some of them were pretty great. I held onto the Google Pixel for almost two years. That was a personal best. Now I’m a self described OnePlus fanboy. I don’t feel the need to upgrade anymore. I went from the 5t to the 6t because I thought it would give so much more. It didn’t. I only bought a 7t after dropping my 6t. Again, I gained nothing. Even though OnePlus’ slogan is “Never Settle” I have settled with them.

Phones aren’t advancing like they once did. Look at the difference between a Palm Centro and a Motorola Droid. That was a couple of years apart. But a Pixel and a 7t? A bigger screen maybe. But Android works just as well on either.

Tell me in the comments what was your favorite phone. Will you be upgrading soon?