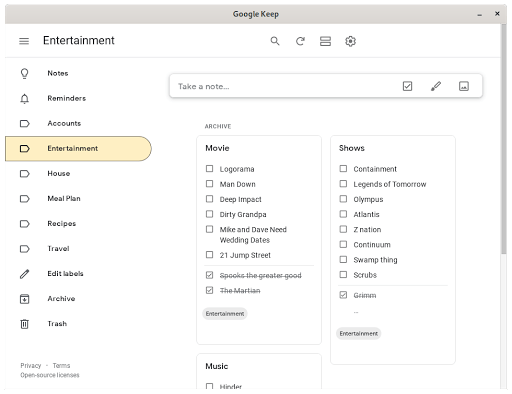 I’ve been a big fan of Google Keep ever since it came out. It easily syncs notes across my devices and its free. But there’s no native Linux client nor is it open source. The apps I’m listing meet my basic criteria: Linux compatible, syncs to Android, free (at least for the basic version), and ideally open source

Simplenote is a free note taking program capable of syncing across Linux, Android, iOS, OS X, and Windows. Web access is also available. Simplenote is really, well, simple. There’s little in the way of organization. Notes can be tagged and searched. Notes themselves are plain text with a checklist option available. Simplenote is backed by Automattic, the same company behind WordPress. The advantage here is the app will allow you to publish notes to WordPress.

Standard Notes
Free and paid upgrades; standardnotes.org
Standard Notes is very similar to Simplenote at the free tier. It syncs across Linux, Android, iOS, OS X, and Windows as well. A web interface is also available. A paid plan enables extensions that turn Standard Notes into a sort of office suite.

Free; notebook.zoho.com
Zoho Notebook is probably the most Keep like competitor on this list. Zoho itself offers a full suite that competes admirably against Google. While many of Zoho’s offerings require a paid plan, Notebook is a totally free offering. It has apps for Linux, Android, iOS, OS X, and Windows. Linux only has a Deb available for install. Web access is also available. Zoho Notebook organizes initially across…. notebooks or folders. Then post it style notes can be created. The notes can contain lists, links, pictures, or even drawings. Notebook is the most full featured Keep or Evernote style service on this list but it is not open source.

Free; joplinapp.org
Unlike the prior programs on this list, Joplin’s notes are in markdown format. Joplin is available in Linux as an Appimge, Android, iOS, OS X, Windows. Whereas others offer their own cloud service to store and sync your notes, Joplin doesn’t other that. Syncing takes place through other services. Nextcloud, Dropbox, OneDrive, WebDAV, and others are supported.

In the midst of trying to capture screenshots of each respective app for this post, Joplin failed. Its on Linux as an Appimage so in theory everything should be present and it should just work. Instead, I have this rather white window that won’t close. I am not amused.

I rebooted and tried again. Because why not. And I got this.

I tried others: Carnet, Planner, WizNote, Turtl…. The ones I listed above are the best of the lot. They worked. I’ve left a lot off this list because it became so frustrating. There’s a lot of half baked projects that ultimately just don’t work. Its one of the more disappointing aspects of Linux and FOSS.

Zoho Notebook most closely matched Google Keep for me. The only drawback is the Deb only packaging. Attempts to convert to RPM failed. If you’re running a Debian based system and don’t mind closed source, Notebook is the way to go.
Standard Note and Simplenote look like twins at first. They’re simple, straightforward, free, easy to use. Simplenote stops there while Standard Note offers room to grow. For straightfoward text lists, either one will work well.
Joplin is the one I want to like but don’t. Its open source. Its compatible with a bunch of cloud services. But I don’t like markdown and an option to switch it off would be welcome. I also have to question the reliability of Joplin.